Please Note: We will be closed on Monday, July 4th in observation of Independence Day. Our ATMs and online banking are open 24/7. We will reopen on Tuesday, July 5th. 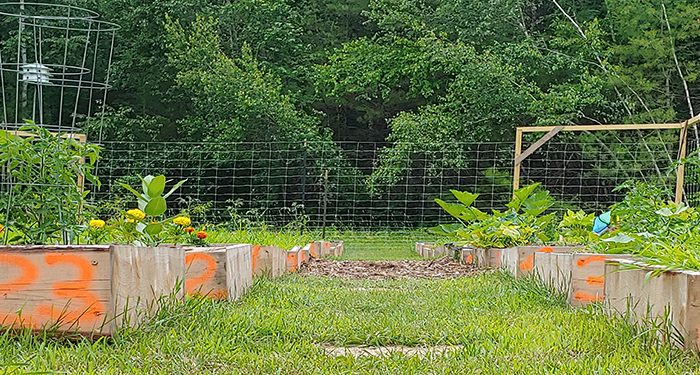 SANFORD, ME – Kennebunk Savings recently provided a donation of over $3,000 to the Sanford-Springvale Mousam Way Land Trust in support of their new and already-expanding community garden. The bank has been a partner on this project from the beginning, with donations totaling over $18,000 since the initial purchase of the land.

“Land is a precious resource in Maine,” said Bradford C. Paige, the bank’s President and CEO. “It’s why we all live here – the beauty of the natural landscape, the bounty of our natural resources. Preserving it and, just as critically, fostering an appreciation for it in future generations is an awesome responsibility.”

In 2017, the Sanford-Springvale Mousam Way Land Trust purchased a plot of “ecologically significant” land on Blanchard Road. The 72 acre parcel of mostly former logging trails contained significant habitat  for life forms in need of protection and conservation. “We fell in love with the land because of its very diverse nature,” said Bud Johnston, the trust’s director.

Many of the state of Maine’s sensitive habitats are impacted by local development – even the areas protected by shoreland zoning. The desire to protect them for future generations of humans and wildlife alike has led to the formation of land trusts, legally bound to preserve these areas forever. The Mousam Way Trust owns just over 800 acres in Sanford and Springvale.

But when the former owners of the parcel on Blanchard Road subsequently donated an additional 38 acres – including an existing barn, an outdoor restroom and a deep well left intact by the previous owners – Bud Johnston saw an opportunity to take a more active role in fostering appreciation and preservation in the community. To Johnston, this additional land suggested a new community center and garden.

The Pence Community Eco-Center, named in honor of frequent and significant donors David and Linda Pence, broke ground in 2018. A community garden, with gardening plots available at low-to-no-cost for low income families, was established alongside the Eco-Center. Initially, a $25 fee was set for use of a bed, but after 80% of applicants met the qualifications to have the fee waived last summer, it was eliminated. A large plot was set aside for the Trust’s work with the Sanford Backpack Program, which sends nutritious food home with food-insecure school children over the weekends. The need was greater than anticipated, and so the community garden is now expanding – by adding an additional 2,000 square feet, they will be able to yield 1,000 pounds of vegetables each year.

Kennebunk Savings’ initial donation was a $5,000 matching grant to support the purchase of the land. Traditionally, matching grants are offered for a period of several months, but the funds were matched by private donations within just a few weeks. The bank later donated $10,000 for the construction of the gardens, and then over $3,000 for expansions. A team of volunteers from the bank also painted the bathrooms.

“We have been thrilled with the results so far,” says Johnston. The community gardens added a waiting list this year, and on the plot of initially purchased land, relatively uncommon spicebush plants were discovered. The shrub is the only source of food for the larval stage of the spicebush swallowtail butterfly, which were soon seen flitting around the community gardens. Spicebush swallowtails were last seen in Maine in 1934.

Since 1994, Kennebunk Savings has set aside 10% of their annual earnings for local charities. Since then, Kennebunk Savings’ charitable giving has exceeded $14 million, including over $1 million in 2019 alone. In 2020, the bank has shifted and stretched their giving guidelines to assist many organizations in weathering the difficulties created by the COVID-19 pandemic, and was named a “COVID-19 All Star” by the Kennebunk-Kennebunkport-Arundel Chamber of Commerce.

Heart to Heart Offers More Than a Ride